Are You Paying to Cool Your Attic, Not Your Home? 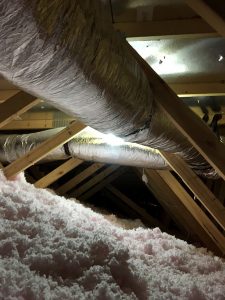 The question in the title may at first sound a bit strange. Why would you cool your attic at all? You almost never go up there, and there’s no reason to provide cooling (or heating) for it during the year.

But the truth may surprise you—because many homeowners are accidentally paying money during the summer to send conditioned air up into their attics. They don’t mean to do it; it’s the result of a problem that’s alarmingly common in modern homes, which is ductwork suffering from air leaks. The ductwork passing through an attic (one of the easiest places to install ducts so they don’t take up space elsewhere in a house) often loses the conditioned air in it through gaps and holes. That means cooling power goes into the attic, where it’s no good to anybody in the rest of the house.

So it’s possible that right now during our hot later summer here in the Central Valley that you’re paying to cool down air that’s going right into the attic rather than to the living spaces. The people in the household will receive some of the cooled air, but less than they should. (According to government studies, the loss of cooled air to duct leaks can be up to 30%.) The air conditioning system will run more often to make up for this loss, causing electrical bills to climb and placing a higher toll on the AC.

How Can I Solve This Problem?

First, you must recognize the problem exists, and this usually begins with noticing a rise in monthly electrical bills over this summer compared to the previous ones. Perhaps you’ve had guests staying in your house and can account for the higher bills with increased use. But if there isn’t a specific reason for the rise in electrical costs, the issue may rest with leaky ducts.

There are other warning signs to look for, which include rattling sounds from the ventilation system whenever the blower fan turns on, musty and moldy smells wafting from the vents due to air from closed off parts of the house entering the ducts, hot spots in rooms, and an unexpected rise in indoor humidity.

When you have suspicions about your home’s ductwork, call on our HVAC technicians. They’ll first determine the source of the problem, which might be a problem with the air conditioning system itself rather than the ducts. If our technicians discover the problem lies in damaged ductwork, they’ll know how to deal with it. Sometimes the solution is as basic as duct sealing with a special mastic sealant or metallic tape. For more extensive ductwork damage, we may recommend replacing sections of the ducts. Many original duct installations in homes are low-quality, which is a reason for air leaks developing. Putting in new ducts sections in these situations is often the best long-term solution.

Whether you need work on your ducts or repairs for your air conditioning in Fresno, CA, you can depend on our experienced team. We not only offer duct sealing service, we have a long history with custom sheet metal fabrication to improve ventilation systems.

Purl’s Sheet Metal & Air Conditioning is on call 7 days a week. Quality is the Cornerstone of Our Success—Since 1952!