Purl’s Sheet Metal & Air Conditioning is proud to receive the Russell Sigler Award for Sales Excellence for 2016. Co-Owners Brian Driggs and Kurt Davidson were honored to accept this special award. This award is given to a very few select dealers to recognize sales excellence. It recognizes companies that embody the same commitment to hard work, dedication to success and high integrity as Russell Sigler. This is a distinct honor to receive this award. Since 1952, Purl’s Sheet Metal has conducted business with the same high standards and commitment to excellence as Russell Sigler. 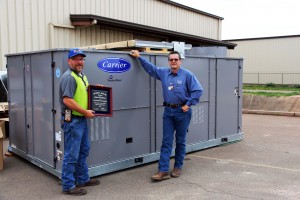 Brian Driggs and Kurt Davidson with the Russell Sigler Award 2016

Russell Sigler started his company in 1950 after being inspired by Dale Carnegie and Napoleon Hill. Russell was called into service in 1941 and retired as a Lieutenant Colonel in 1946 and then worked as an engineer. He attended classes from Willis Carrier, who is the founder/inventor or modern air conditioning. A savings bond and war bonds he had sent to his parents to help out at home during the war provided his startup capital. His parents put those bonds in a savings deposit box to save for him.

Always a believer in positive thinking, Russell wrote himself a letter in 1949, stating that he expected to “earn 1 million dollars by 1980 by establishing air conditioning contracting business to install and service the best air conditioning systems at competitive prices.” Not only did he meet that goal, but, by 1970 the company was already recording sales of $8 million dollars. His next goal is to reach $1 billion dollars in sales in 2017 when he will also reach 100 years of age. Russell Sigler Inc. is currently comprised of 29 locations in 6 states.