On Call 7 Days a Week 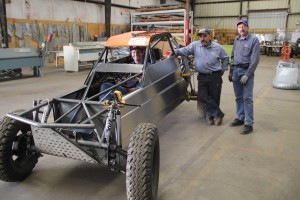 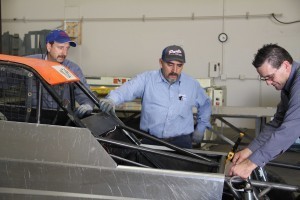 Let the flag drop and the dust fly!   The Davidson Motorsports team is very close to being ready for the upcoming Battle of Primm Race on February 22 & 23rd in Primm, Nevada.

Purl’s Sheet Metal & Air Conditioning is proud to be a sponsor the Davidson Motorsports Racing Team.   Our Fabrication technicians just completed the custom sheet metal racing skins for the 1820 car.   The car is now prepped and ready for paint and stickers.   Beans Davidson will be behind the wheel of the 1820 in the upcoming desert race.

What Kinds of Repair Issues are Involved with Zone Control Systems

Zone control systems divide your home into different sections, and allow you to control the individual temperature in each other. So if you’re cooking in the kitchen and have the stove turned up, you can set the heat lower there than in the living room, where someone else might be reading or playing video games. Some zone control systems are a part of a ductless mini split system, which uses multiple units spread across your home. Others establish a series of valves and seals in an existing duct system, which can then be adjust via a control panel to open or seal different sections of ducts. Either way, they still experience their share of breakdowns and repair needs. Here in Madera, heating installation services can usually perform repairs on them. But what kinds of repair issues are involved with zone control systems?

Frankly, it depends on the kind of zone control. For valves inserts in an existing system, the problems usually arise when they become misaligned or some issue appear with the controls that open and close them. As a result, you won’t be able to turn the heat on or off in a given section, which render the whole purpose of the system obsolete. A technician will likely need to access your ductwork and find out what the problem is.

With ductless mini split systems, the problem could stem from any number of causes. If your air flow it low, you may be experiencing a problem with the fan motor or a clog in the vents. Lower heat or cooling capacity could mean a leak in the refrigerant levels, while a build-up of dust or dirt could cause an overall lowering of efficiency (leading to higher energy bills).

Regardless of what kinds of repair issues are involved with zone control systems, you need the right kind of technician to perform the operation. Purl’s Sheet Metal & Air Conditioning offers heating installation and repair services in Madera, and our trained experts won’t rest until you are completely satisfied. Pick up the phone and give us a call today.

It’s hard to imagine Valentine’s Day without the traditional greeting cards, whether accompanying a gift of flowers and candy, or sent between children in a school room. For commercial greeting card companies, February 14th is as important to them as the December holidays, Easter, and Mother’s Day.

Valentine’s Day as a celebration of romantic love predates printed greeting cards by a few centuries. In fact, the reason that sending romantic greeting cards became popular was because of the most un-romantic thing you can imagine: a reduction in postage rates.

In 1765, Parliament authorized the creation of “Penny Posts” that used a uniform rate of one old penny per letter throughout Great Britain and Ireland. Printers took advantage of the ease with which people could send letters to each other on Valentine’s Day by crafting cards with love poems on them. Many of these verses were collected in 1797 in the book The Young Man’s Valentine Writer, which was a resource for the lover with a romantic soul but not the most confident poetry style.

By the mid-19th-century, the Valentine’s Day greeting card was flourishing across England. Although people still followed a tradition of creating handmade Valentine’s Day cards from lace, ribbons, and flowers, commercially produced cards now overtook them. In 1835, the English post office mailed 60,000 valentines. As production expenses dropped, the English card manufacturers branched out creatively with humorous and sometimes vulgar cards… many of which we would find startlingly familiar in the 21st century. One of the common jokes on these cards was to design them to look like marriage certificates or court summons.

Across the Atlantic, the United States was slower to embrace the popular British custom. It wasn’t until 1847 that a U.S. printer mass-produced greeting cards for Valentine’s Day. Only two years later, American journalists noted how rapidly people in the country had embraced the tradition, turning into a fad that has never died down. The woman who printed the first U.S. Valentine’s Day card, Esther Howland, is today recognized by the Greeting Card Association with the annual “Esther Howland Award for a Greeting Card Visionary.”

The greeting card industry certainly has reason to thank Ms. Howland. Her idea of going into business printing romantic greeting cards, which came to her after she received a traditional English valentine when she was 19 years old, now sells 190 million cards in the U.S. every year. That number doesn’t include the smaller exchange cards used in elementary school classrooms, which would swell the number to 1 billion. (Who receives the most Valentine’s Day cards each year? Teachers!)

Whether you send out Valentine’s Day cards—handmade, store-bought, digital—or not, we at Purl’s Sheet Metal & Air Conditioning hope you have a happy February 14th.

Packaged HVAC vs. Split Systems: Which is Right for Me?

Here in Fresno, heating installation services offer a wide variety of heating options, which can prove quite bewildering if you haven’t had to deal with heating systems a lot. Consider, for example, the question of packaged HVAC vs. split systems: “which is right for me?” you may ask. You can’t answer that until you know what each system entails and what the potential benefits and drawbacks are. We’ve provided a brief breakdown below.

Packaged HVAC systems are those that combine a heater and an air conditioner into one single unit. They’re usually placed outside the home, either next to an outside wall or in some cases on the roof. (Businesses often prefer rooftop units because it saves space, and homes can adopt similar principles should they wish.) They usually use a system of ducts running throughout your home (typically in unobtrusive places such as the attic or crawlspaces), which blows hot or cool air into various rooms and passageways to gradually warm the air.  That allows the unit to function as efficiently as possible, and gives you a single set of controls with which to run it all.

A split system, on the other hand, uses components both inside and outside your home. A furnace on the inside component heats the home in the winter, while an external compressor provides cool air in the summer time. Like package HVAC systems, they use a series of ducts to distribute the air. Because the components are split up in this way, they’re less space efficient than packaged units and require more room. They also cost more to install, since the process requires more finesse and delicacy to properly assemble. On the other hand, once assembled, they tend to be more energy efficient than packaged units, and require less power to do their jobs.

When contemplating packaged HVAC vs. split systems, which one is right for you depends on the specifics of your circumstances. The Fresno heating installation services technicians at Purl’s Sheet Metal & Air Conditioning can help you make the right choice, then install your new unit with efficiency and care. Pick up the phone and give us a call today!

Tags: Fresno, Heating Installation
Posted in Heating | Comments Off on Packaged HVAC vs. Split Systems: Which is Right for Me?